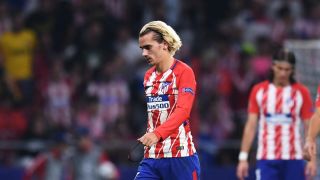 France star Griezmann put the hosts in front with a 40th-minute penalty in their first continental outing at the Wanda Metropolitano, but blamed himself for the defeat.

Alvaro Morata headed Chelsea level with his seventh goal of the season before substitute Michy Batshuayi stole the points with the last kick of the game.

Asked what went wrong for Atletico, who were watched from the stands by Diego Costa, Griezmann told reporters: "Maybe we lacked a better game from me. Apart from the goal, I did not have a good day.

"They were the better team in every aspect. There is nothing else to say. We must try and win all our games now."

1 - Antoine Griezmann was the last Atletico player to score at V. Calderon in and the 1st to do it at Wanda, both penalties. Baptism. September 27, 2017

Atletico boss Diego Simeone concurred with the latter assessment after a result that leaves his team with one point from two matches and aiming to play catch-up across a double-header against Qarabag.

"The opponent was the better team, they were the more comfortable team in all moments and deserved to win," he told reporters.

"They were better tactically, physically and played with intensity. You must congratulate a team who played as Chelsea did."