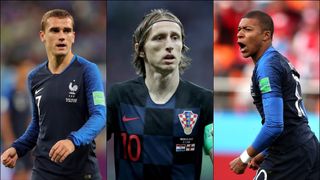 The champions of the world will be crowned in Moscow on Sunday, when France take on Croatia at the World Cup final at Luzhniki Stadium.

Lifting that trophy is all that matters for the players and staff involved, but, looking further ahead in 2018, this match could also decide the destiny of football's greatest individual prize.

The Ballon d'Or looks, finally, to be slipping from the grasp of Lionel Messi and Cristiano Ronaldo, one of whom has won the award every year since Kaka claimed it back in 2007. Each had success at club level once again last season, but disappointing World Cups with Argentina and Portugal mean there may at last be a new name on the trophy.

Three of the most likely candidates will come face-to-face in Moscow this weekend: Antoine Griezmann, Luka Modric and Kylian Mbappe. But who has the best chance?

Perhaps unfortunate to be only third in 2016 (things might have been different had France won the Euro 2016 final), Griezmann will arguably never have a better opportunity.

The Atletico Madrid man was the undisputed star for his club in 2017-18 as they finished second in LaLiga and won the Europa League.

He scored 29 goals, the last two in that final win over Marseille in May, and registered 13 assists from a total of 65 chances created for team-mates. But his importance to Diego Simeone's system is better underlined by his work off the ball: he won back possession 246 times in total in all competitions, which is quite remarkable for a centre-forward.

With three goals and two assists in six games at the World Cup, mostly from a free role behind Olivier Giroud, Griezmann has been the attacking-threat-in-chief of Didier Deschamps' rather pragmatic set-up. If he stars in the final, he might finally get the individual accolades he deserves.

The favourite to be named the World Cup's best player, Modric has been the driving force behind Croatia's historic run to a first major final in their history.

The 32-year-old has won three man-of-the-match awards in six appearances and generally captained his team with aplomb. Those leadership skills were best highlighted in the last-16 win over Denmark, when he missed a penalty in extra time but had no hesitation in stepping up and scoring from the spot in the shoot-out.

Modric only managed two goals and eight assists for Real Madrid last season, but he has never been in the team simply to get the ball in the net. Including World Cup games, he has made 2,739 successful passes in all competitions, averaging a completion rate of 90 per cent, and actually created three more goalscoring chances than Griezmann overall. He has also won back the ball 365 times.

A calm, controlling but inspirational figure in Real Madrid's third Champions League win in a row, he has replicated those qualities for his country. According to FIFA, he has covered 63km at these finals, more than any other player. Croatia will probably only win if Modric has a strong game; if he does, the Ballon d'Or must surely follow.

If anyone is going to stop Modric or Griezmann getting the award, it is probably Paris Saint-Germain's prodigious attacker.

Mbappe had to share the limelight in his first season at Parc des Princes with €222million man Neymar, but 21 goals, 16 assists and a domestic quadruple highlight just what a remarkable year he had.

He has three goals from his six matches in Russia, but it is his explosive performances that have had the watching world gripped. His devastating display in the 4-3 win over Argentina, in which he became the first teenager to score twice in a World Cup match since Pele in 1958, was simply unforgettable.

The 19-year-old is probably behind Griezmann and Modric in the Ballon d'Or race, but, if he produces another startling showing in Moscow, that could all change.

15 - Kylian Mbappé attempted 15 dribbles against Belgium  (7 completed), highest tally for a French player in a World Cup match since Opta analyses the competition (since 1966). Hook. July 10, 2018