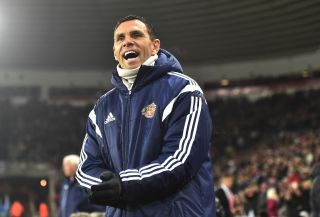 Gus Poyet has revealed he turned down an approach from Kilmarnock last summer to focus on a concrete job offer which fell through.

Now the former Brighton and Sunderland boss is eager to return to management in England ahead of the new season after two years out of the game.

The former Chelsea midfielder was sounded out by Killie after Steve Clarke left to become Scotland manager in May 2019 before the Ayrshire club turned to Angelo Alessio, another former Stamford Bridge employee.

Poyet told the DW Podcast: “I had a very, very small and honest approach from Kilmarnock last year when Clarke went to the national team. It was not the right time.

“They were very honest, very polite. Because of connections through a player, they just asked me if I would be interested.

“But at that time I was negotiating with a team. You know when you think, I am the next manager of this team, we are getting to the details and then one day they disappear, and you think: ‘What happened?’

“At that time when I talked to Kilmarnock, I said, from the bottom of my heart thank you very much, I would love to have an experience in Scotland but right now I am in the middle of something that is going to happen.

“And then it didn’t happen and it was embarrassing. Because they were probably saying, ‘hello, what was that big, important thing?’

“I cannot tell you but it was tough. Something happened in the middle, I don’t know what, and boom.”

Poyet has his heart set on a return to English football, where his coaching career began with roles at Swindon, Leeds and Tottenham before leading Brighton into the Championship in his first managerial position.

The Uruguayan then took Sunderland to the League Cup final and kept them in the Premier League against the odds before being sacked the following season in March 2015 with the club one point outside the relegation zone.

Poyet has since managed AEK Athens, Real Betis, Shanghai Shenhua and Bordeaux, where he exited in August 2018 after criticising the club’s decision to sell a player.

Although he is keen to work again in France one day, he is pinning his hopes on rekindling his career in England.

“I wanted to get out to see something different and come back,” the 52-year-old said.

“My idea was to go to Greece and back to England. Because we did very well in Greece, they took me to Spain. China was connections and then I lost the momentum in England and the call from Bordeaux was special, it’s a massive team in France.

“I came back to England and would like to get back in but it’s been difficult. You get out the circle and getting back has been a little bit more difficult than I expected.

“I can wait, luckily, but my staff need to work. There are a few things but nothing for sure. And it’s been delayed because of obvious reasons with coronavirus, but I hope we are going to start the season with a team.

“There are no direct negotiations but some approaches, depending on some managers moving. Unfortunately in football you need a manager to leave for you to get in. I am waiting on these moments.”