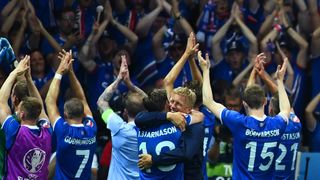 Iceland co-coach Heimir Hallgrimsson does not think his players are aware of the importance of their achievement of making the Euro 2016 quarter-finals.

Most thought Iceland had done well in just qualifying for the finals in France, but they shocked everyone when they drew with Portugal in their first game, before knocking England out at the round of 16.

Their dream run ended at the hands of hosts France, who won 5-2, but Hallgrimsson said he was not sure the players understood the gravity of what they had achieved for their small nation.

"I think that will sink in in a few days when they start to read the papers and see what has been written. You lose all the media thing when you're in the tournament and you don't see the TV, especially the Icelandic TV, so I think it will sink in really quickly after the tournament," he said.

"It will change their lives, you wait and see.

"Icelanders are really proud of this achievement and you can see that in the numbers, both the numbers that came here and also those who came together in Reykjavik and everywhere to watch the games. So I think it has brought the nation closer to each other and that's fantastic when you are a part of something that does that."

And what reception is Hallgrimsson expecting upon the team's return to Reykjavik?

For starters, he is hoping the adoring public can forgive them for losing 5-2.

"Hopefully they're not throwing eggs at us after this performance," he joked.

"I think the fans, how appreciative they are to the players, and what is also fantastic is that the players showed their appreciation to the fans.

"It's funny that we lost 5-2 and all the French fans had gone home yet still the Icelandic fans were there cheering the team on, and that's fantastic.

"You're proud to be Icelandic, not only because of the performance of the players in this tournament but especially the supporters."