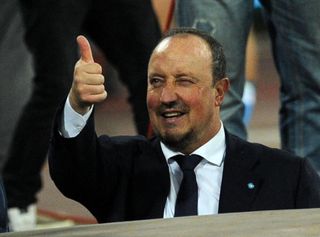 Moyes' tenure was cut short after less than 12 months of his six-year deal on Tuesday, following a disappointing debut campaign at Old Trafford that saw United surrender their Premier League crown meekly, while qualification for the UEFA Champions League is out of the club's reach.

Club stalwart Ryan Giggs has been placed in temporary charge, but is not thought to be among the contenders to take on the role on a permanent basis.

Benitez's name has not been mentioned among the front-runners to become the next United boss, the Spaniard's previous time in charge of rivals Liverpool would make his appointment an unpopular one among the Old Trafford supporters.

Furthermore, Benitez - who also had a spell as interim manager at Chelsea - had several run-ins with Moyes' predecessor Alex Ferguson, who is a United legend after 27 trophy-laden years in at the helm.

But Hamann - who enjoyed a successful spell playing under Benitez at Liverpool - believes the 54-year-old's Premier League experience makes him the ideal candidate to take over.

Speaking to talkSPORT, he said: "It is certainly a name they should consider.

"They need somebody with a track record who can work with the big players, who knows what is required to get in the Champions League and play a big role in it for years to come.

"Rafa Benitez is in Italy at Napoli but his family still lives in the north west and he has always made it clear that he would love to return to the Premier League at some stage.

"The way it is going at Liverpool, I don't think he will be there any time soon and he has been at Chelsea, so there are not too many clubs out there for him. I don't think Arsenal will suit him.

"He, and Manchester United, will be a very good match. He had a few run-ins with Fergie but he only pointed out a few facts, as he would say.

"If I was a United fan I would want somebody who gives you the best possible chance to get back in the Champions League."