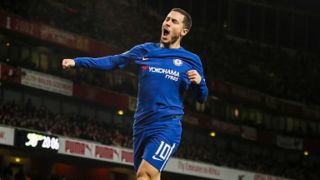 Hazard pipped De Bruyne to the gong by 11 votes with 326, while Mertens was 56 votes behind, as Manchester United striker Romelu Lukaku finished fourth.

De Bruyne had won the award the past two years and the City playmaker topped the second round of voting, after Mertens won the first round.

However, it was not enough to upstage Hazard at the gala ceremony in Belgium on Wednesday – the 27-year-old receiving the most points overall for his maiden honour in his home country.

"My first prize in Belgium and certainly not my last one," Hazard said.

Hazard, however, admitted he would have voted for Napoli talisman Mertens.

"What a good year he had. With a lot of goals too. I go for him, because he also played in a position that was not actually his. He was not an attacker," the former Lille star added.

Hazard, who was unable to attend due to commitments with Nike, starred in 2017 having helped Chelsea to the Premier League title last season.