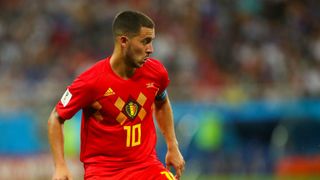 Roberto Martinez lauded Belgium star Eden Hazard as a player who makes football "a beautiful sport" and applauded his influence as captain.

Hazard has enjoyed a strong World Cup for Belgium so far, scoring two and assisting as many from just three matches.

His form has helped Belgium reach the last eight where they meet tournament favourites Brazil in Kazan on Friday.

But one element of his performances that many may not necessarily notice is his influence as a leader, and that is the side of his game that Martinez is particularly impressed with since getting to Russia.

"He's been a real captain, a real leader and someone who's always been himself," Martinez told reporters at the Kazan Arena on Thursday.

"What you love about his temperament is that whatever the score, opponent, moment, he's always available to get the ball and be decisive.

"His level of the play has been the highest, he's been decisive in attack, a leader in what the group needs to achieve.

"We are a team and in international football that [being a team] is difficult. He's played a massive part as captain of this group.

"You see a lot of the captain through the team. When you see Hazard enjoying his football, he makes it a beautiful sport, he puts a smile on the face."