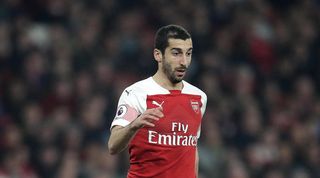 Henrikh Mkhitaryan has opened up about his struggles in the Premier League.

Manchester United brought the Armenia international to England in 2016, paying £30m to secure his services from Borussia Dortmund.

The attacking midfielder struggled to replicate his Bundesliga form at Old Trafford, though, and was sent to Arsenal in exchange for Alexis Sanchez in January 2018.

But Mkhitaryan also failed to convince at the Emirates Stadium, with the Gunners loaning him out to Roma this summer.

And the 30-year-old says he lost his appetite for the game during his three years in the Premier League.

“The last month at Arsenal I was not happy,” he added. “Now I am in Rome and I focus on them. This is not a step backwards as great football is played here. I wanted a change of scenery and for me it’s an opportunity to be seized.

“I have to enjoy playing football, no matter the place. In England, I no longer felt this pleasure.

“The messages after the two national matches made me happy, but now I have to concentrate on Rome.

“I will never give up and I will fight to the end. I'm not afraid of pressure; I'm used to it having already played with great teams.

"I know that the slightest mistake is criticised while a good performance is exalted. If you agree to play football you must be ready to face criticism.

"Serie A is a great opportunity, I accepted [the offer] immediately with enthusiasm. We didn't even talk about money.”

Mkhitaryan is in line to make his Roma debut when Paulo Fonseca’s side face Sassuolo this weekend.