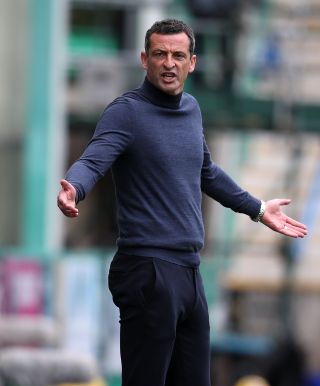 Ross went for quality over quantity in the transfer market and the cash Hibs paid Dunfermline for Nisbet has now yielded seven goals.

The latest was a piece of brilliance as the 23-year-old looped a first-time volley into the top corner to earn his side a 2-1 victory at Balmoral Stadium.

Ross told Premier Sports: “We have tried to do that with the squad we have put together. You are not always going to play well in football matches and that has happened to us on occasion this season and it did today.

“So when you are not playing well you need at the top end of the pitch players that will make the difference.

“We feel as if we have got that and Kevin showed that again. His overall performance probably wasn’t at the levels it has been at, but in that moment he showed why he is doing so well this season.”

Hibs trailed at half-time to a Daniel Higgins free-kick, but Ross’ half-time change quickly paid dividends as Jamie Gullan came on amid a change of shape and levelled following a smart move in the 49th minute.

“We showed character to respond to being behind,” Ross said. “We didn’t really play well in any part of the game, we found all elements of the match tough and a few players weren’t quite at it.

“We didn’t look comfortable first half in particular. I was really critical of the players at half-time because I thought we were so far away from the level of performance we needed.

“We didn’t play great second half but we looked much more of a threat.”

Cove boss Paul Hartley was “really proud” of his team’s performance in their season opener.

“The show they put on was outstanding all over the pitch,” the former Hibs and Hearts player added.

“Individually they were fantastic, as a team they were brilliant, and I am just disappointed they didn’t get anything from the game. I felt they deserved something.”