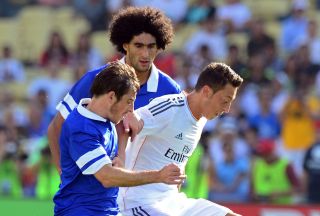 Everton rejected a bid from United for two players - widely reported to be full-back Baines and midfielder Fellaini - labelling the offer "derisory and insulting".

The Premier League champions appear set to raise their initial bid, thought to be in the region of £28 million, as David Moyes looks to return to Goodison Park in order to bolster his new squad at Old Trafford.

Despite the on-going saga, USA keeper Howard is delighted to see the pair knuckle down and contribute to the team.

Fellaini went closest to breaking the deadlock as Everton were held 0-0 at Goodison Park by West Brom, hitting the post in the second half, while Baines was a model of consistency on the left flank.

"To be fair to Felli and Baines, you look at some other clubs and they have got some idiots," Howard said.

"A team becomes interested in them and they don’t turn up for training.

"That’s not these guys. They work every day as if their life depended on it."

Moyes has riled sections of Everton's support with his pursuit of the duo after claiming he would not have prevented them from leaving during his tenure.

Fellaini remains Everton's club-record purchase after his £15m arrival from Standard Liege in 2008, while Baines, who moved from Wigan a year earlier, has made 248 appearances for the Merseyside club.