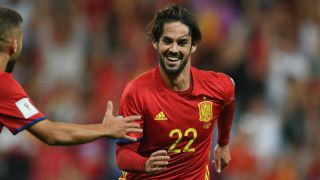 Isco's stunning individual performance for Spain against Italy left Giampiero Ventura feeling he had no choice but to applaud.

Spain thumped Ventura's side 3-0 in a World Cup qualifier at the Santiago Bernabeu on Saturday, with the Real Madrid star's first-half double proving decisive before substitute Alvaro Morata sealed victory late on.

Isco delighted his home crowd with a magnificent free-kick and an accurate low strike, his second goal seeing him glide past Marco Verratti, who was given a torrid time.

The Spain standout also executed a magnificent second-half nutmeg against the Paris Saint-Germain midfielder which has since gone viral.

2 - Isco Alarcon is the first player to score two goals from outside the box in the same game for since at least 2004. Sensational. September 2, 2017

Italy boss Ventura watched on in admiration of Isco's performance and conceded to actually enjoying the experience.

"I could not help but applaud him when I saw him, he was a rival, but I am a lover of the beautiful things of this sport," said Ventura.

"It was nice to see Isco live. He is a great player who did incredible things, you just have to think about the technical manoeuvre of the nutmeg he did in midfield, he left two opponents red-faced, then in the second half between three opponents and you do a nutmeg, that means he has incredible class, obviously superior to the rest of the players.

"But not just Isco, there were other players with a lot of class too. You have to be humble to recognise it and we have to work in order to be competitive."

Italy are at home to Israel in Group G on Tuesday, while leaders Spain travel to Liechtenstein.