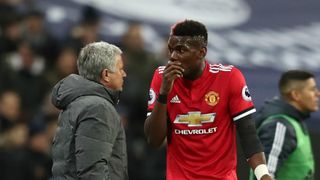 Frank Lampard is still trying to work out what sort of player Manchester United's Paul Pogba is but worries that the France international could have too much for Chelsea.

Pogba and United face Lampard's former club Chelsea in the FA Cup final on Saturday, with both sides looking to clinch silverware in a season where they failed to challenge Manchester City in the Premier League.

Former Juventus man Pogba has come in for criticism at times over the course of an inconsistent campaign, and Lampard - himself a goalscoring midfielder in his day - continues to be confused by his lack of impact.

"I don't know what Paul Pogba quite is," Lampard said, speaking at FWA Live. "He makes bad decisions as a midfield player, basic decisions, and then he does something fantastic.

"I can imagine that wrecking Jose Mourinho's head, because he's going, 'Well I want you in my team for that fantastic stuff, but then there's other stuff that's really not good for the team.'

"What he did was try to shock and embarrass him out of it and said, 'I'm going to call you out,' a few times mid-season. I'm not sure Pogba got the point.

"Paul Pogba is naturally more talented than I was. In the box, I worked hard to score goals. But in terms of attributes, he'd run all over me. He's got better feet in terms of how he can dribble with it.

"There's no point in dribbling in your own half, though, unless you really have to get out of trouble.

"All that flick and roll of the studs looks great, but I'm not a big advocate of that. A lot of young players go, 'Look at that on YouTube, it's amazing.' I don't like that.

"His numbers aren't good enough, but I'm worried Pogba can dominate that midfield. For all I just said there, he's got it in him to do that.

"He should be getting 15 goals a season and assists, and dominating midfield, because he has everything."