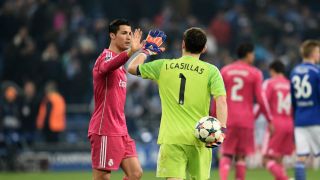 Real Madrid would be getting a rough deal if they ended up with Neymar as a replacement for Cristiano Ronaldo, according to their former goalkeeper Iker Casillas.

Madrid's all-time record goalscorer threw his future in to doubt in the immediate aftermath of last Saturday's 3-1 Champions League final win over Liverpool when he spoke of his time at the Santiago Bernabeu in the past tense.

Ronaldo partially rowed back on those statements in mixed-zone interviews in Kiev and then signed off a speech at Madrid's trophy parade by telling supporters: "Until next year…"

Nevertheless, the fact Madrid have been persistently linked to a move for Neymar, along with the Brazilian's club Paris Saint-Germain being one of a select few in Europe who could offer a financial package in line with Ronaldo's demands, meant the Portuguese superstar merely fuelled existing rumours.

Speaking at an event where he was presented as an ambassador for betting company Sportium, Casillas – who is now with Portuguese champions Porto – spoke of Ronaldo in glowing terms and urged against any prospect of him leaving the Spanish capital.

"Cristiano is the best team-mate I've ever had," he said. "It's incredible what this guy is doing – he is [still] improving every day.

"It's crazy, whatever people are saying. He is happy at Madrid and whatever has been said before he always remained at Real Madrid.

"I don't think he will leave. Cristiano could be compared to [Alfredo] Di Stefano.

"Would I change him for Neymar? No. I wouldn't change him for any player in the world. I understand football changes but, nowadays, Cristiano is Real Madrid."

Casillas believes Neymar should avoid the turbulence of another blockbusting transfer and focus upon making good on his €222million switch from Barcelona to PSG by establishing a similarly definitive spell with his current club.

"He changed a big club like Barcelona for a new challenge in PSG. I wouldn't understand his exit right now," the 37-year-old said, before adding slightly mischievously, "But I do understand that everybody would love to end up playing for Real Madrid."