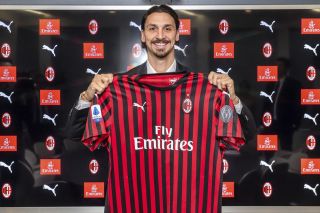 Zlatan Ibrahimovic vowed to help turn AC Milan’s season around after joining on a six-month deal.

The 38-year-old striker completed his medical with the Rossoneri on Thursday, with his deal including an option to extend for next season.

Milan are currently 11th in Serie A and the former Sweden international hopes to improve the form of the club he previously played for in the 2011-12 campaign.

“My objective is to help the club and the team improve our current situation,” Ibrahimovic told the club’s official website.

“Personally, I just want to do my best.

“I have lots of fond memories, only good ones. This is a great club, a great team and San Siro is great too.”

Ibrahimovic revealed that talks regarding a return to the club had been in progress for several weeks.

Milan chief football officer Zvonimir Boban and technical director Paolo Maldini were both in regular contact with the forward.

“Actually in the last three weeks I spoke more with them than with my wife,” he added. “Everything went well, though. I’m finally here.”