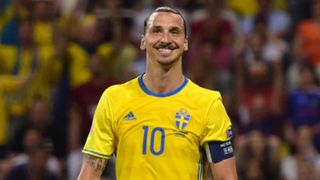 Ibrahimovic brought down the curtain on four trophy-laden seasons in the French capital by signing a one-year deal at Old Trafford.

But, speaking to Goal.com, the 34-year-old conceded playing Stateside later on in his career is still a possibility.

"Once I had decided to leave PSG there were many offers, but with Zlatan that is normal.

"I know that teams from the MLS were interested, but the opportunity to play for Manchester United, and of course to work with my good friend Jose Mourinho again, was impossible to turn down."

Ibrahimovic turns 35 in October and Beckham's mooted Miami franchise has a tentative launch date of 2018, but the Swedish great still believes time is on his side.

"I have a contract with Manchester United, but I feel in great shape," he explained. "I feel as though I could play until I am 40. It is impossible to predict the future."

Ibrahimovic added: "David is a good friend of mine, and he has asked me to play for his team. For now, I want to achieve big things with Manchester United, but I have a lot of respect for the MLS, and anything is possible."