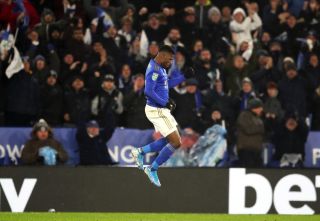 The striker has scored six goals in eight games this term and came off the bench to rescue the Foxes on Wednesday.

They were forced to settle for a 1-1 draw in their Carabao Cup semi-final first leg with Villa.

Iheanacho cancelled out Frederic Guilbert’s first-half opener and was pleased to maintain his form.

“It’s another goal, I’m really happy. I got the chance and I took it,” he told LCFCTV. “As a striker you need to be focused and composed in front of goal and the chance came and we took it.

“The squad did really well in the second half and the pressing we did led to the goal so we’re happy.

“I think it wasn’t a bad result, we got the draw. We should’ve done better but in the second half we were a bit better. Now, we need to focus on the next games.

“It’s two legs now. Of course, we have a Premier League game next (against Southampton), but I think we’ll concentrate on that then we’ll get to Villa Park and see what happens.”

Villa lost 4-1 at home to Leicester in the Premier League last month but take the Foxes back to Villa Park on January 28 with the tie finely poised.

Boss Dean Smith said: “Overall, I’m really proud of the players to be leaving here unbeaten. It took a lot of hard work, a great defensive display and in all that we gave them a goal as well.

“Really pleased that we’re going back to Villa Park all square. It will be a full house with a raucous crowd behind us and I’m really looking forward to that.

“We’re one step closer to a Wembley final in a major cup competition, but there’s things we’ve got to get better at.”