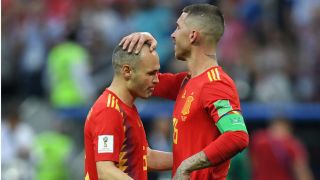 Among the favourites for the trophy heading into the tournament, Spain joined the likes of Germany, Portugal and Argentina in making an early exit when Igor Akinfeev kept out Iago Aspas' penalty in Moscow.

Iniesta started on the bench on Sunday, coming on midway through the second half as Spain attempted to retake the lead cancelled out by Artem Dzyuba's spot-kick, but could not inspire a victory.

And the 34-year-old, who will now join Vissel Kobe after calling time on his Barcelona career, confirmed he has played his final game for Spain.

"It's a reality that this is my last game with the national team, on a wonderful stage," Iniesta, who scored the winner in Spain's World Cup final victory over Netherlands in 2010, said.

"The endings are not always the way we dream. The national team will continue to be successful because of the level of players we have and that is what they should try."

Julen Lopetegui's dismissal on the eve of the tournament undoubtedly unsettled Spain, but Iniesta insisted the players have no excuse for not overcoming the hosts.

"It would be an advantage to say that Lopetegui's thing has to do with the result, in the end those of us who have the ball are the players," he continued.

"The main culprits in football are the players that are the ones on the field."