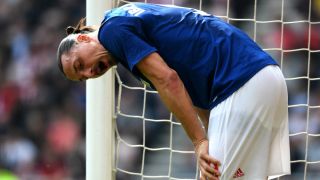 Former Manchester United striker Teddy Sheringham has backed Zlatan Ibrahimovic to return from injury rather than be forced into retirement.

Ibrahimovic has vowed to return to football rather than retire, even though he is highly unlikely to be fully fit again until after he turns 36 in October.

Sheringham was 31 when he joined United in 1997 and enjoyed spectacular success at Old Trafford, winning three Premier League titles in a row, as well as the FA Cup and Champions League in the historic treble triumph of 1999.

And the former England striker is confident that football has not seen the last of Ibrahimovic.

"I've been very impressed with Ibrahimovic, but he's had a tough injury, and for him to get over that type of injury at his age, is going to be really hard for him," he told Omnisport.

"But he's a professional, he's a true professional, and he will do everything in his powers to carry on. I don't think he's got any ideas of retiring anytime soon, so I'm sure we'll see him back."

Ibrahimovic's future at United remains in doubt, with the forward's contract expiring at the end of the season and no decision yet announced over whether the option to extend the deal will be taken up.

The former Barcelona and Paris Saint-Germain star managed 28 goals and 10 assists in all competitions before his injury.