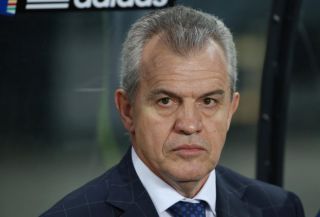 The Mexican assumed control of the national team after their disappointing display at the World Cup, but is yet to taste victory after two games in charge.

Defeats to Ivory Coast and Colombia saw Japan finish bottom of Group C with a solitary point in Brazil - coming from a goalless draw with Greece.

Alberto Zaccheroni resigned in the wake of that disappointing showing, but Aguirre has been unable to find a way to get Japan back to winning ways, overseeing a defeat to Uruguay and a draw with Venezuela so far.

Jamaica are playing the role of warm-up act for Japan ahead of Tuesday's match with Brazil in Singapore, and Aguirre is looking for an improved performance from his squad to end their poor run.

The rejuvenated Shinji Kagawa has been recalled to the squad along with striker Mike Havenaar, but it is at the back where Aguirre hopes to see the most progress, despite the withdrawal of Southampton's Maya Yoshida.

"My aim as Japan coach is to get a victory against Jamaica and raise the performance of the team," the 55-year-old told a news conference. "A little in attack but especially defensively.

"Two defensive withdrawals was unfortunate, but it is a good opportunity for them [the players coming in]."

With the Asian Cup on the horizon for Japan, the need to find their form is crucial if they are to go to Australia in January with a hope of retaining their title.

The two nations have met on three previous occasions, with Jamaica winning the only competitive match during World Cup 1998.

Theodore Whitmore struck both goals in 2-1 victory in France to give the Caribbean nation their only ever win at the finals.

Jamaica coach Winfried Schafer also has competitive action to think about ahead of the clash, with the Caribbean Cup - a tournament they host - coming up next month.

However, with only two wins since December 2012, Jamaica are not in the best of form and have lost four of their last five internationals.

Those defeats included an 8-0 drubbing against France in June and a 3-1 loss at the hands of Canada last month.

Much will depend on Colorado Rapids striker Deshorn Brown, who has scored 10 goals in the MLS and struck his first international goals in friendly victories over St Lucia and Barbados in March.