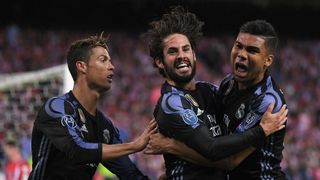 Zinedine Zidane's side were sitting pretty after a 3-0 win in the first leg, but Atleti roared back at the Vicente Calderon as goals from Saul Niguez and Antoine Griezmann put the whiff of a comeback in the air.

However, that was extinguished shortly before the break when Isco tucked in on the rebound to send Los Blancos to their third European Cup final in four years.

With success in LaLiga in their hands, Madrid are aiming to become the first team to retain the Champions League in the modern era and Isco believes they have overcome a major hurdle.

"We are very happy, what we have achieved is not easy, we have eliminated a great rival," Isco is quoted as saying by Marca. "Getting to the final this way tastes much better.

"It was what we expected, they scored two goals from our mistakes, we started very badly, but then we recovered and we played well.

"Our goal set them back and it was already very difficult.

"After the 2-0, at last, we entered the game. It was a shame that we had to concede those two goals to understand the game."

The final few minutes of the game were played out in a biblical downpour, but Madrid's players remained on the pitch after the full-time whistle to thank their fans in an uncovered section of the stadium.

"It is something they deserve," Isco said. "They have endured the downpour like champions. We have no trouble thanking them."