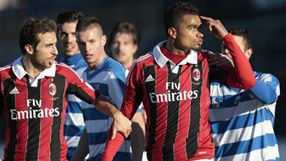 Ghanaian Boateng was widely praised across the game after stopping play at Italian fourth tier side Pro Patria, booting the ball into the stand and marching off in the company of his team mates after hearing repeated monkey chants.

The referee then abandoned the match after 26 minutes.

The fourth tier disciplinary commissioner imposed a one-game stadium ban on Pro Patria but left any decision on Milan up to his Serie A counterpart.

"In the current regulations of football, no rule allows a team to stop a game and abandon the pitch without the agreement of the referee or public safety bodies," a Serie A statement read.

"However, the essential values of sport and civility exclude disciplinary action in a gesture of solidarity towards a victim of vulgar insults solely because of the colour of his skin."

The fact the disciplinary commissioner even considered punishing Milan will surprise many in football.

FIFA President Sepp Blatter said Boateng had been "courageous" but that the walk-off was not a long-term solution.

Italy has long battled a serious racism problem in football.