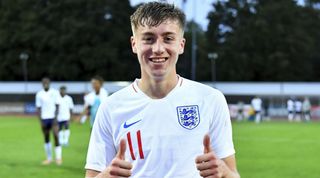 Clarke joined Tottenham in the summer for close to £10 million, and was immediately loaned back to Leeds for this season.

However, Spurs are already considering recalling the 18-year-old, according to the Daily Mail.

The promising winger played 22 Championship games last season, but is yet to feature in this campaign.

Leeds are restricted to five temporary signings in their matchday squad, meaning Clarke has had to rely on the Carabao Cup for first-team action.

But with the Yorkshire club now out of the Carabao Cup, the youngster may struggle to get more oppurtunities this season.

Spurs are reportedly concerned by the potential lack of oppurtunities for a player they want to develop.

There is believed to be a recall clause in Clarke's loan deal that could see him return to north London in January.

Why are so many players missing penalties? An expert's guide to scoring spot-kicks every time