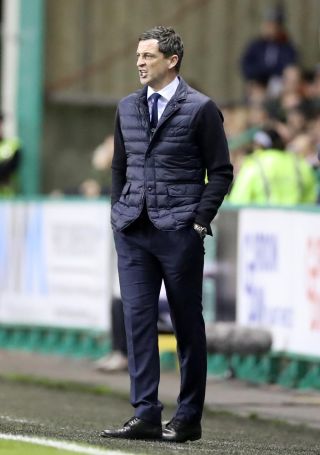 Hibs face an Easter Road rematch against the Ladbrokes Championship leaders after Robbie Neilson’s side twice came from behind to draw 2-2 on January 19.

While Ross was frustrated that his side failed to hold on for the victory in the first game, he was pleased with how they performed – and wants to see more of the same in a game he stressed the importance of.

He told a press conference shown live on Hibs TV: “You can never predict how the game will go; it could be a game of fewer opportunities tomorrow night. I can’t imagine it will be because of how both teams are – I think it’ll be similar to the first game.

“And we know that if we can be ruthless with those opportunities when they come along it’ll give us a really good chance of winning the match.

“But we’ll have to play well again. We’re looking forward to it.

“It’s a huge game for us in terms of our season and one I think the players understand the significance of.

“We knew how tough a match it was going to be for us in the first game. I was delighted with how we played, coming back off the winter break and in a tie I think a lot of people had predicted might be the one that caused an upset.

“So I’m just frustrated that we didn’t turn the performance into the win. But we know that if we can replicate large parts of that performance tomorrow night… We’re a difficult team to play against, we carry an attacking threat, score a lot and create.”

Hibernian remain unbeaten in 2020 after following up last week’s 2-1 win over Hamilton with a goalless draw at Motherwell at the weekend.

Ross wants his players to take confidence from their strong form.

He added: “The players are in a good place. I was at pains to point out at the weekend, both before and after the game, that in terms of league form we’re up there just tucked in behind Rangers, Celtic and Motherwell.

“So players need to take confidence from that and keep growing that belief that they’re a good side.”

Ross is boosted by the return of David Gray (illness) and he has no fresh injuries, but defenders Jason Naismith and Ryan Porteous and midfielder Stevie Mallan (all knee) remain out.

The Hibs boss said he is hopeful of bringing in St Mirren’s Paul McGinn in the coming days but the defender would not be eligible for Tuesday’s cup clash even if he arrived at the club in time.

Ross said: “Obviously Jim (Goodwin, St Mirren’s manager) spoke publicly yesterday about the situation and just as he said, we made an enquiry as to the possible availability of Paul and were given encouragement that would be the case.

“So it’s now a case of trying to bring him to the club and we’re hopeful we’ll be able to do that over the next couple of days.”