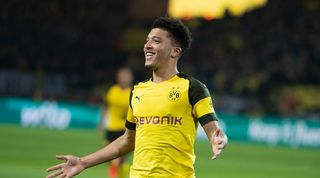 Manchester United's failure to finish in the top four has ruled them out of the race to sign Jadon Sancho, report the Daily Mail.

The Borussia Dortmund winger has enjoyed a sensational season in the Bundesliga, scoring 11 goals and providing 14 assists to help Lucien Favre's men challenge for the title.

United were reportedly readying a bid for the former Manchester City man as they seek to bolster their attacking options ahead of the 2019/20 campaign, but their transfer plans lay in tatters following Sunday's 1-1 draw with Huddersfield.

That result means Ole Gunnar Solkjaer's side cannot finish any higher than fifth this term, and their absence from next season's edition of the Champions League means they will not be able to persuade Sancho to move to Old Trafford.

The £100m-rated teenager is therefore likely to stay at Signal Iduna Park for at least another season, with Dortmund having already confirmed their place in Europe's principal competition.