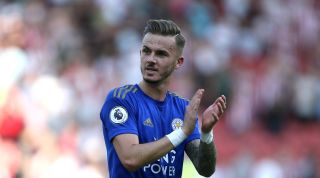 Leicester manager Brendan Rodgers insists James Maddison will not be leaving the club this month.

The attacking midfielder has enjoyed a fine first half of the season at the King Power Stadium, scoring six goals and providing three assists in the Premier League.

Maddison's form has earned him links with Manchester United, who are keen to add more creativity to their ranks.

However, Rodgers says Leicester will not be sanctioning the departure of one of their prized assets in January.

"There's no pressure to sell and no need to sell," he told reporters. "James is a very talented player and he will be here in January and beyond.

"He's a player we're keen to remain here and help us on this journey over the next years. James and his representatives are speaking with the club and these things take time."

Bournemouth winger Harry Wilson, who is currently on loan at the Vitality Stadium from Liverpool, is reportedly a target for the Foxes.

Rodgers refused to address speculation surrounding the Wales international, but he did confirm that he is seeking reinforcements as Leicester continue their Champions League qualification push.

"We want to add to squad if we can," he added. "It all comes down to availability.

"We've got a really strong squad and lots of them are young players evolving. We want to but if we can't we'll continue with the squad we've got and look to reinforce in the summer."

Jamie Vardy is expected to feature in the first leg of Leicester's League Cup semi-final against Aston Villa on Wednesday, with the former England international having been absent since Boxing Day.

The East Midlands outfit are seeking their first cup triumph since 2000, but Rodgers is keen to keep the pressure off his players.

"It's just important to stay calm," he said. "You don't need to magnify the importance of the games."