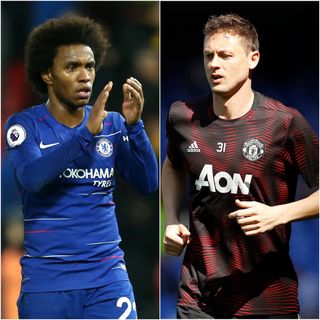 Willian has told Chelsea that he wants to stay at Stamford Bridge where he has enjoyed a “perfect” career, the Daily Express reports. The Brazilian is in the final year of his contract and had been linked to numerous European clubs as he has not been offered a new deal by the Blues. But the forward, 31, has been told by manager Frank Lampard that he is an important part of Chelsea’s future. The winger said: “From my side, I want to stay. I have one year left and I want to stay because I like to play for Chelsea.”

AC Milan are being targeted for a £890million takeover by the world’s second-richest man, Bernald Arnault. The magnate who made his fortune with fashion’s Louis Vuitton, worth an estimated £86 billion, has “bold plans” to puchase the Italian club, the Daily Mail reports while citing Il Messaggero. The club’s owners, Elliot Management, have given an official denial that any offer has been made to buy it.

Manchester United midfielder Nemanja Matic could be leaving for Serie A. The Serbian had not appeared for the Red Devils this season until Saturday’s win over Leicester, and the return of French ace Paul Pogba means the 31-year-old is likely to return to the bench. The Sun says Juventus are very keen on securing Matic.

Mark Dempsey is close to returning as one of Ole Gunnar Solskjaer’s asistant coaches at Manchester United, according to The Daily Telegraph. The 55-year-old, who is popular with Red Devils’ players, was taken to hospital in Perth during the side’s pre-season tour of Australia. The former United midfielder was seen at training on Friday and is expected to do opposition scouting in coming weeks before he returns to full duties.

Gary Neville would ‘run a mile’ if he was offered Man Utd job https://t.co/7evKj8DqqO— The Sun Football ⚽ (@TheSunFootball) September 17, 2019

Victor Wanyama: The 28-year-old could leave Tottenham for a return to Celtic, Team Talk says.

Ryan Fraser: 90min.com reports Bournemouth are prepared to give the 25-year-old Scotland international a new deal worth £100,000 per week. But Chelsea, Arsenal, Everton and Wolves are all circling the winger.