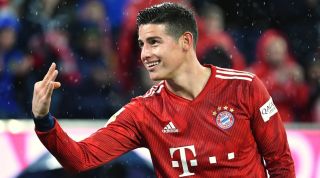 Manchester United and Chelsea could launch moves for James Rodriguez after Real Madrid made the playmaker available for transfer.

James has spent the last two seasons on loan at Bayern Munich after falling out of favour at the Santiago Bernabeu.

The Colombia international has made 67 appearances in all competitions during his time in Bavaria, but an alleged falling-out with manager Niko Kovac means he is unlikely to still be at the Allianz Arena next season.

And with Madrid set to embark on a squad overhaul this summer, James could be on his way to the Premier League in the next few months.

According to Marca, the 27-year-old is available for a cut-price fee of just £36m.

Chelsea and United are both monitoring the situation closely, although the Blues' plans could be derailed if FIFA uphold their two-window transfer ban.

United, meanwhile, may have to secure Champions League football in order to attract a player they have tried to sign previously.

The 15 best free-kicks of all time: where does Messi vs Liverpool rank?