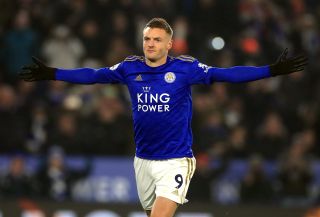 The former England hitman has been rewarded after he scored 23 goals to claim the Premier League’s golden boot last season.

The story continues 📜#lcfc is delighted to confirm that @Vardy7 has agreed a contract extension with the Foxes to June 2023! 📝 pic.twitter.com/LBstXEVNUR— Leicester City (@LCFC) August 26, 2020

He said: “The journey that I’ve been on with this football club is hard to describe, and although we’ve accomplished so much together already, I know that I’ve got so much more to achieve with this team, so it’s a special feeling to be able to commit my future to Leicester City once again.

“I love playing my football in front of our fans at King Power Stadium and I’m delighted to continue this journey at such an exciting time for the club.

“We’ve a fantastic team that I believe is capable of getting even better and I can’t wait to see what we can achieve together in the next few years.”

Vardy has netted 103 goals in 211 Premier League appearances for Leicester and 129 in 309 games overall to sit fourth in the club’s scoring charts.

He scored 24 times when the Foxes claimed a shock Premier League title in 2016 and helped them to the quarter finals of the Champions League a year later.

Last season Rodgers’ side finished fifth, dropping out of the Champions League spots following a run of two wins in their final nine games after returning for the restart following the coronavirus lockdown.

They still booked a spot in the Europa League, one of Rodgers’ main targets for the campaign.

It is a major boost for the Foxes with England left-back Ben Chilwell expected to join Chelsea.