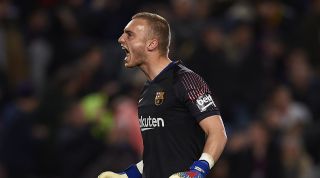 Manchester United will attempt to sign Jasper Cillessen if David de Gea departs the club this summer, according to The Daily Record.

De Gea is out of contract in summer 2020 and has yet to put pen to paper on a new deal.

PSG and Juventus have been linked with the Spaniard in recent months, and United may opt to sell if the goalkeeper continues to stall on a new contract.

The club hope that De Gea will eventually decide to extend his stay at Old Trafford, but they have identified Cillessen as their leading target if the ex-Atletico Madrid man moves on.

The Dutchman is second choice at Barcelona behind Marc Andre ter Stegen and will push for a move away this summer.

The Blaugrana are reportedly willing to accept offers of around £22m for Cillessen, who moved to Catalonia from Ajax in 2016.