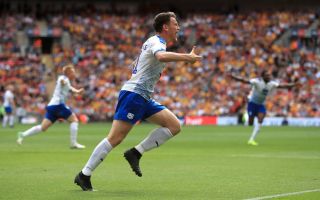 Connor Jennings scored in the final 90 seconds of extra time to earn Tranmere a 1-0 victory in the Sky Bet League Two play-off final against Newport and seal back-to-back promotions.

The Wembley showpiece was heading to penalties after a scrappy game of few chances, but Jennings headed home to break the deadlock and send Rovers back to the third tier for the first time since 2014.

It completes an impressive comeback for Micky Mellon’s side, who won promotion from the National League at this stadium last year.

There was heartbreak for Newport, who played extra time with 10 men after skipper Mark O’Brien was sent off, as they should have been handed an 85th-minute penalty and their wait to play in League One for the first time goes on.

Given that these two sides kept 38 clean sheets in League Two over the course of the season, there was little surprise that goalmouth action was at a premium.

There was a 25-minute wait for what turned out to be the only real moment of danger in the first half.

Tranmere found some space on the right and Jake Caprice picked out James Norwood perfectly, but the striker’s sweet connection from a first-time shot drew an instinctive save out of Joe Day, who palmed the ball away.

It was clear that Norwood was going to be Tranmere’s main threat and he was furious with his team-mate David Perkins for not playing him through on goal before half-time.

The move still ended up with a chance for Norwood, from another Caprice cross, but he headed over and quickly remonstrated with Perkins.

Rovers, who finished two points above their opponents after 46 games of the regular season, dominated the second half but failed to get near to testing Day again, with a poor piece of control from Jennings ruining their best moment.

Rovers goalkeeper Scott Davies had been a bystander for much of the game but saved his side in the 73rd minute.

Dan Butler’s cross from the left was allowed to make its way to the back post where Jamille Matt appeared destined to score, but Davies stuck out a left hand and turned and the header onto the post.

Referee Ross Joyce did his best to make an enemy of Newport as he chose not to award what looked a blatant penalty in the 85th minute when Emmanuel Monthe clattered into Matt.

He then reduced the Exiles to 10 men in the 89th minute when handing skipper O’Brien a second yellow card after he hauled Norwood down on the halfway line.

The additional period followed much of the same pattern and a penalty shoot-out seemed a certainty.

But in the 119th minute, there was ecstasy for the Tranmere fans as Jennings was left unmarked in the six-yard box and he converted Caprice’s cross to become the hero.