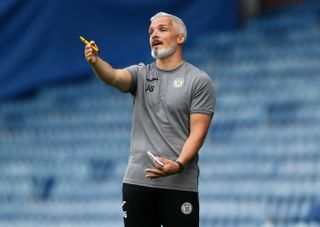 The Irishman was reluctant to comment on Bolingoli’s actions but claimed they were different to those of the “naive” Aberdeen players who “misunderstood” the guidelines and caught Covid-19 on a night out.

“It’s difficult to punish clubs as a whole because of one individual,” he said.

“You could end up with different circumstances at every football club where maybe a certain individual who isn’t involved in the first team and doesn’t care as much about the situation as everybody else.

“So I think it would be difficult for clubs to police every single individual and member of staff. It’s not just football players and the footballing staff, there’s a lot of other staff members at every club.

“We have had promising dialogue with the players and staff, they are well aware of what’s expected of them.

“We have asked everybody for the time being to stay away from restaurants, pubs and nightclubs, and just make good choices. It’s as simple as that. If we do that we give ourselves the best chance of staying free of coronavirus.

“But of course it’s very hard to control partners, wives, and obviously kids are going back to school now as well. Everybody is mixing now with other people.

“So it’s difficult to control what comes back into the house but as a football community we have to control our own environment.”

Saints had a pre-season friendly postponed after Goodwin was among six false positive tests along with one confirmed case as a staff member caught the virus from his partner, who was exposed to it at work.

But another postponement was not a disaster for Goodwin with a trip to Hamilton to come on Saturday.

“We were obviously disappointed that the game was off, particularly in the manner it was postponed. But I have to say it might be a bit of a blessing in disguise for ourselves considering we had such a difficult game on Sunday against Rangers and then to have to recover so quickly for what was going to be another extremely difficult game against Celtic,” he said.

“So hopefully that means we are a lot fresher for what is a massive game for us against Hamilton on Saturday.”

Meanwhile, Goodwin confirmed he had made an enquiry to sign PSV Eindhoven striker Joel Piroe on loan. The 21-year-old played 20 times for Sparta Rotterdam last season.

“We are in the hat,” he said. “It’s a bit of a long shot but if you don’t ask, you don’t get. We have asked PSV to be open-minded about it and we expect to hear back by the start of next week.

“We are talking to a number of other players and we are continuing to scour the UK and Europe to see what we can get, whether that’s a good loan signing or a good permanent.”