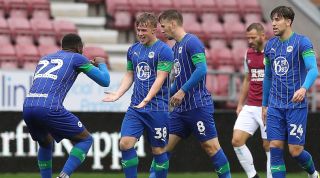 Liverpool and Chelsea are both keeping tabs on Wigan's 17-year-old starlet Joe Gelhardt, according to Goal.com.

The teenage forward is considered one of the brightest prospects in the Championship, and is also said to be attraction attention from Premier League clubs Leicester, Everton and Wolves.

Gelhardt made his professional debut in April and featured in Wigan's 0-0 draw with Barnsley on Saturday.

The Latics starlet has already gained a reputation as one of the most promising youngsters in the country.

Several Premier League clubs are expected to send scouts to watch Gelhardt in action for England's Under-18s against Australia on Friday.