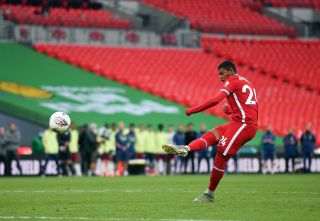 Liverpool manager Jurgen Klopp admits it would have been selfish of him to keep Rhian Brewster knowing the 20-year-old would barely get any game-time.

Brewster, who scored 11 goals in 22 appearances on loan at Swansea in the second half of last season, became Sheffield United’s record signing after completing a £23.5million move on Friday.

However, he is so highly-rated at Anfield despite not yet making a Premier League appearance that sporting director Michael Edwards has negotiated a three-year buy-back option in addition to a 15 per cent sell-on fee.

Huge love to all my teammates, taking me under their wing and pushing me to be better every single day. I leave here with special memories and countless learnings. But most importantly, better than I arrived ❤️🔴 #YNWA 2/2— Rhian Brewster (@RhianBrewster9) October 2, 2020

But no matter how good Liverpool think Brewster is, Klopp said it would not be fair to hold onto him on the chance he would develop into a genuine first-team player, especially after he fell further down the pecking order following the arrival of Diogo Jota for £43million.

“If I am selfish that never helps really to be honest,” Klopp said.

“I need a player in the right place and at the right moment so that means he is ready to fight.

“Everybody needs to know, all the young boys need to know, that we don’t keep them here at all costs – just so we have a solution for one or two games a year – that is not how we work.”

Brewster missed more than a year with a serious knee injury and Klopp said the priority after getting him fit again was for him to have regular game-time.

“He couldn’t make it here so far but he has made big steps in his development,” added Klopp.

“Rhian was really seriously injured and first we had to make sure he was ready again for all the demands of professional football and he is, 100 per cent.

“But it is a different situation when you are younger, (it is important) a player like Rhian in this position up front makes now the next steps and uses the time he lost during the serious injury so it is possible a move to another club would make sense.”

While Brewster has departed, Klopp is ready to welcome back captain Jordan Henderson, who has been missing with a knee injury since coming off at half-time of the victory at Chelsea on September 20.

The midfielder returned to individual training this week and although he will participate in some group sessions, Sunday’s match at Aston Villa may come too early for him.

However, having been picked by England manager Gareth Southgate, Klopp is in the unusual position for once of wanting one of his players to get more minutes with the national team.

“I was in close contact with Gareth Southgate and it is clear that he will use the time with national team for getting match-fit,” Klopp added.

“Hendo had four or five days normal pre-season before he played his first game for us because of the situation we were in.

“He played against Chelsea and got this little injury, which was not serious, but he has been working on his physical things already for a few days but now (it will be) more football specific with us and then the national team.

“He will have minutes for England, which is then a proper win-win situation which I’m really happy about.”