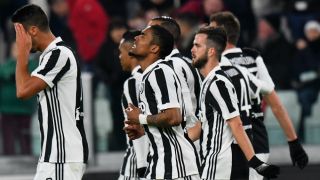 Juventus moved back to within a point of Serie A leaders Napoli as a solitary goal from Douglas Costa proved enough to clinch a nervy 1-0 win over lowly Genoa.

After Napoli overcame Atalanta by the same scoreline on Sunday, Massimiliano Allegri’s side kept pace with their table-topping rivals thanks to Costa's 16th-minute strike.

The Brazilian's burst in behind Genoa's defence allowed him to poke home Mario Mandzukic's perfectly weighted pass from close range and give the Bianconeri a deserved lead.

However, returning to domestic duties following the mid-season break, the hosts struggled to create too many clear-cut chances in a game that saw them once again without the services of injured top-scorer Paulo Dybala.

They had to instead rely on a rock-solid defence to retain their advantage through to the final whistle, as a sixth straight clean sheet at the Allianz Stadium secured three precious points in a two-horse race for the title.

Genoa had arrived in Turin on a four-game unbeaten run in the league under Davide Ballardini, the experienced coach having engineered an upturn in fortunes since being appointed for a third spell in charge of the club last November.

They had stunned the champions by taking an early two-goal lead at the start of the season in a game they eventually lost 4-2, but it was Juventus who were quickest out of the blocks in the return fixture.

Playing towards a closed Curva Sud, the hosts saw their early dominance rewarded with Costa's opener.

The Brazilian came out on top in a 50-50 challenge with Andrea Bertolacci before spreading the ball out to Mandzukic, who picked out his team-mate's advancing run with a well-weighted pass into the penalty area from the left flank.

Mattia Perin was unable to beat Costa to the ball for the goal, yet Genoa's goalkeeper was alert enough to stop two attempts from Miralem Pjanic increasing Juventus' advantage in a one-sided opening half.

The game followed a familiar pattern after the break, yet Juventus' superiority failed to lead to a second goal that would have given them breathing space.

Alex Sandro and Pjanic both failed to hit the target with shots from the edge of the area, while Armando Izzo's desperate clearance close to his own line prevented Gonzalo Higuain from converting Stephan Lichtsteiner's driven cross from the right flank.

The crucial interception kept Genoa alive, and they understandably sensed an opportunity to pick up an unlikely point as the home crowd became anxious during the closing minutes.

However, despite the tension in the stands, Juventus held firm to record their third triumph of the season over Genoa, having also knocked them out of the Coppa Italia last December.