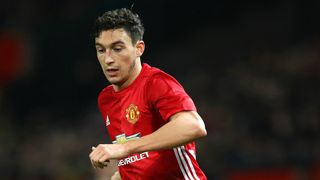 Matteo Darmian has revealed the "doors are open" for a potential return to Italy as his future at Manchester United remains unclear.

The full-back made just five Premier League starts for United in 2017-18 and manager Jose Mourinho has added further competition in the position by signing Diogo Dalot from Porto.

Darmian is in the final year of his contract and is yet to hold discussions with United over triggering an option to extend his stay.

Linked with Juventus in the past, the former Torino defender would consider a move back to his homeland if it allowed him the chance to play on a more regular basis.

"United are [a] top [club], but it's only normal that I want to be involved," he said in an interview with La Gazzetta dello Sport.

"I've still got a year on my contract and we haven't discussed renewing. My agent knows what I want.

"Juve, Inter, Napoli or somebody else - it's not for me to say. If it were to happen, I would go for the best solution. The doors are open."

Darmian - who moved to Old Trafford in July 2015 - nearly sealed a return to Serie A last year, only for United to block his departure.

"I was close, but United opposed it as they considered me important and I myself wanted to play there after only one year with Mou [Mourinho]," he said.