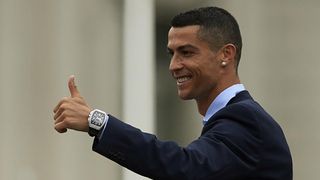 Cristiano Ronaldo moving to Juventus would be a surprise but could give the Portuguese superstar a push for the latter years of his career, says Edwin van der Sar.

The Dutch icon was a team-mate of Ronaldo at Manchester United, with the Real Madrid legend said to be closing on a €100million switch to the Serie A champions.

Ronaldo hinted after helping Madrid to a fourth Champions League crown in five years, thanks to a defeat of Liverpool in Kiev, that he was considering leaving the club.

And with Juventus reportedly at the front of the queue for Ronaldo's signature, Van der Sar feels moving to Turin could benefit the 33-year-old.

"He won a couple of Champions Leagues with Real Madrid. He was the leading club scorer there, living in a fantastic capital," Van der Sar told Omnisport, speaking courtesy of Adidas.

"Maybe the fans are demanding, that's to say the least of it. It will be a surprise move to be fair. Maybe different surroundings, different stadiums, different lifestyle could give him an extra push for the later stages of his career.

"But what he has done so far, the couple of years I played with him at United, you could see him growing up and you could see the qualities coming into him, and he needed to learn a lot.

"Progressed at Madrid and then last two years it became... the amount of goals that he is scoring is just insane."

At his unveiling on Monday, new Juventus signing Emre Can said it would be "great" to play with Ronaldo.