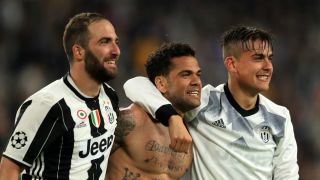 Dani Alves said he will not change his approach to football, after his "crazy" style fired Juventus into the Champions League final.

Alves had a hand in all of the Italian champions' goals as they beat Monaco 4-1 on aggregate to secure a place in the Cardiff showpiece via Tuesday's 2-1 second-leg victory.

The 34-year-old is now eyeing up a fourth Champions League title, after winning three at Barcelona, and said his studious way has helped him hit his peak with the Italian giants.

"Am I surprised to be at my best level? I work a lot, I live the game with a lot of intensity and love," Alves told Mega.

"Everything I am in my life is the result of my daily work, my professionalism, and in the end I am collecting the fruit of the daily work that you do not see.

"People think I'm crazy, but when it comes to work I know what I have to do."

Alves has made just 28 appearances in all competitions for Juve this season, having suffered a fractured leg in December after a struggle to acclimatise to Italian football, but he believes he has now fully made the transition.

"At first it cost me, but here there is a different way of seeing football," he added.

"When I was adapting, I got the injury, maybe to take it easy, reinvent myself in this club.

"I had to adapt to the team, the philosophy of the club. I'm here, making my team enjoy it, enjoying myself."

Alves was the undoubted star of the tie, setting up Gonzalo Higuain's double in Monaco and Mario Mandzukic's opener in Turin before outdoing them both with a 25-yard volley to cap Juve's progression.

However, the 34-year-old put his trio of assists above the stunning strike of his own.

"The most important thing is to help my team to win, whether scoring or providing assists," he told Mediaset Premium. "I don't score very often, so I'm happy, but in a way I prefer the assist to a goal, so everyone goes home happy."