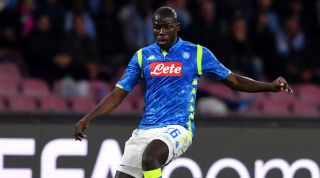 Napoli are holding out for a fee in the region of £107 million, acoording to Il Mattino (via Daily Star).

Manchester United manager Ole Gunnar Solskjaer is thought to be a huge admirer of the Senegalese defender and is a high priority this summer.

It's understood that United have been preparing an £84 million bid to test Napoli's resolve.

The Azzuri are keen to sell Koulibaly, 27, sooner rather than later as they want to reinvest the cash in new signings.

But the Reds will reportedly face stiff competition from their rivals Liverpool.

The Champions League winners are believed to be contemplating a bid of their own having contacted the player's agent.

Klopp is thought to be keen to provide Virgil Van Dijk with a world class central defensive partner.

Napoli will hope to exploit any chance of a bidding war between the Premier League clubs.

There is also interest from Juventus and Paris Saint-Germain.

Andy Mitten column: Of course people form opinions on footballers from their social media output – why don’t players realise that?