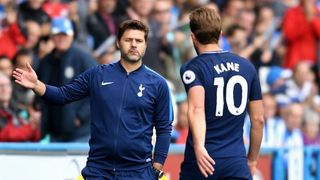 Tottenham manager Mauricio Pochettino played down talk of Harry Kane being on the same level as Cristiano Ronaldo and Lionel Messi after he matched their best efforts for goals in a calendar month.

Kane was on target twice as Tottenham brushed aside Huddersfield Town 4-0 on Saturday, making it seven goals in a week and 13 in September, a tally Ronaldo and Messi have not exceeded.

Only Messi has scored more goals in 2017 than Kane, but Pochettino gave suggestions of the England striker being close to the same level as the two men widely regarded as the best players on the planet short shrift.

"It's so difficult to speak every three days about Harry Kane to find different words to describe him," Pochettino told a post-match media conference.

"He's fantastic. He's great in front of the goal. When we don't have the ball he is the first available to run, to fight, to work hard for the team. That mentality is fantastic and makes him one of the best strikers in the world.

"I don't want to compare because you [can] take the headline out of context but I think Cristiano is a different level, like Messi. Harry is still so young but he is showing he is fantastic. The gap to improve is massive for him.

"We try to push him every day to get better, better and better.

"[You] always can adapt to improve. That is our mentality. To be available, open your mind and to know if you stop training and to think that way you start to go down. Every player has the possibility to improve."

Kane received a warm ovation from the entire ground when he was brought off late on, and Pochettino was delighted with the reaction of the home fans.

"Fantastic. I am so proud to be a manager in England," Pochettino added.

"That was fantastic from the Huddersfield fans. To recognise one of the best players in England. His country loves him. That is so important. I enjoyed it a lot. The stadium, everything makes us very proud to be here in the Premier League in this country. I am so happy to manage here."