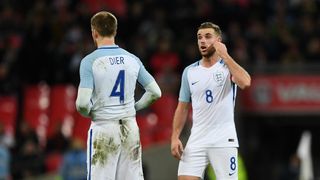 Gareth Southgate only plans on deploying one of Eric Dier or Jordan Henderson as a holding midfielder for England at the World Cup, while a strike pairing of captain Harry Kane and Jamie Vardy is also unlikely.

Vardy and Henderson are set to line-up against Costa Rica when England play their final pre-tournament friendly at Elland Road on Thursday.

But Liverpool skipper Henderson, who was in contention for the captaincy alongside Dier and Kane, could find himself as the odd man out as Southgate settles on the 3-1-4-2 formation that has taken shape since the March friendlies against Netherlands and Italy.

"I think we will only want to play with one pivot," said Southgate, whose youthful squad have Group G games against Tunisia, Panama and Belgium to negotiate after they land in Russia next week.

"Henderson can play as a number eight, so that gives you an option; Dier can play as a centre-back. So they both have another way into the team.

"No, [they haven't played in those positions under me] because most of Henderson’s games we played with a two and played them together but that's not an unrealistic possibility for Henderson to play as an eight.

"He played a lot more advanced for most of his career. I am not sure Liverpool had many options as a pivot so he ended up doing that role."

Henderson and Dier form part of the squad's leadership group alongside Kane, Manchester United full-back Ashley Young and Manchester City midfielder Fabian Delph, but Southgate will not allow seniority to give a pass into his side where a smoothly functioning system is increasingly paramount.

"It is a key decision, but that's management isn’t it?" he said. "You either select players or you choose your system and pick the best people to fit into it.

"They're the tough calls. I'd be amazed if the two of them aren't important figures during the tournament for us, but there is clearly the possibility they might not both play in every match."

Sterling's new central role off the centre-forward could feasibly open up the possibility of Vardy partnering Kane, whose spot as number-one striker is locked in.

However, even a stellar showing from the Leicester City favourite in Leeds would probably fall short in terms of sealing a starting spot against Tunisia, with Southgate keen on variety in his forward line.

It's our last day at before the head to Leeds ahead of tomorrow's game against Costa Rica.You can watch this morning's training session live – right here – from 11.15am. June 6, 2018

"We've looked at that at times in training. At the moment we've not gone with it," the England boss said of a Kane and Vardy link-up.

"We chose to link Harry with Raheem – we liked the look of that. There's no reason that those two couldn't play together.

"That would be different, though, because Vardy's strength is running behind teams and less coming short. You'd be asking Harry to come and link a bit more. Maybe there's moments in games where that's the threat that's needed."

"There was fluidity of movement. I don't see many teams where two just stand up there."

Stoke City's Jack Butland will start in goal against Costa Rica, while Liverpool teenager Trent Alexander-Arnold will be handed a debut at some stage.

A final chance for Southgate's squad to press their claims will come in an 11 v 11 training ground match on Monday, slated to run for 35 to 40 minutes at St George's Park.

"I probably made that a bigger thing because we've only got two [pre-World Cup] friendlies, but it won't be 'possibles v probables'," Southgate explained. "We'll look at different things within that [game] as we do every day."