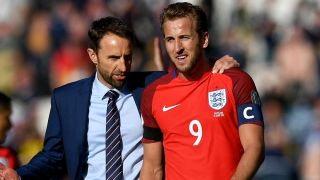 Harry Kane has been named England captain for the crucial World Cup qualifier at home to Slovenia on Thursday.

England can secure their place in next year's tournament in Russia with a win and will be skippered by the in-form Tottenham star for the game, although manager Gareth Southgate is yet to decide on a permanent captain.

Kane was skipper for England's double-header against Scotland and France in June, before handing over the armband to Liverpool midfielder Jordan Henderson for last month's games with Malta and Slovakia.

Gary Cahill is also thought to be a candidate for the role vacated by retired Wayne Rooney, but Kane appears to be at the front of the queue.

"His leadership qualities are invaluable to us as a team and he is in a good moment with his form," Southgate said at his pre-match media conference.

"I have known him for a long time. He has matured and is improving all the time."

Asked about a permanent captain, Southgate said: "I haven't decided yet. We saw potential leaders in the group at the start.

"But [they were] lads who hadn't had experience of leading and how do we allow for that to happen, and how do we give them a feel of it, and I think that's worked well over the last few months.

"All of those experiences will stand them in good stead. Different situations, different opportunities to be in front of people, sharing a responsibility of team. I think that's key.

"You are talking about leadership experience that comes over time."

It's been a great week!Now looking forward to meeting up with later and getting the job done. October 1, 2017

Kane himself also spoke at the media conference, adding: "It makes me very proud, growing up as a kid you dream of playing of your country and being captain as well.

"There are plenty of leaders in this team and other guys are going to have a go to see how it feels.

"I don't think having an armband on your arm makes a difference to how you play. I will go out there to try and win and score goals.

"There are plenty of players on the pitch who will help each other out when the going gets tough as well."

Spurs star Kane scored 13 goals for club and country in September, a return that matched the most prolific calendar months enjoyed by Lionel Messi and Cristiano Ronaldo in their illustrious careers.

Other than Kane's suspended Tottenham team-mate Dele Alli, all members of Gareth Southgate's squad are available to face Slovenia.