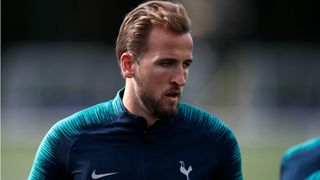 Tottenham must not become preoccupied with Barcelona and instead focus on kick-starting their own Champions League campaign on Wednesday, according to Harry Kane.

The Premier League club go into the Group B fixture at Wembley Stadium without a point to their name after letting slip a one-goal lead in a disappointing 2-1 defeat to Inter.

Spurs opened with a home win over Borussia Dortmund in last season's competition but, after their late collapse in Italy last month, now face the daunting prospect of hosting the LaLiga champions knowing another defeat will put a serious dent in their qualification hopes.

Yet while he acknowledges Lionel Messi's side will provide a "big test", Kane wants Spurs to play positively in front of their own fans, rather than worry too much about their star-studded opponents.

"It's a massive game in the group - you never want to start with two losses," the striker told the media.

"At home, we've got to be strong if we want to progress. It's a big game for us, obviously. We know Barcelona are a top side but we showed last year that we can beat the top teams, especially at home.

"We are looking forward to the game and we know it's a big test. As players, you want to play against the best in the world, and Messi is certainly that.

"But we need to focus on ourselves as well - we've got some great players and we need to play with energy and attack the game. Hopefully, if we do that, we can come out on top and take on that momentum for the rest of the campaign.

"We got off to a great start when beating Borussia Dortmund at home last season but obviously not as good in losing to Inter in this campaign, so we need to bounce back."

on tomorrow's atmosphere: "We had an amazing crowd last season [against Real Madrid] and we should have a full house this time around too."October 2, 2018

While Spurs slipped up at San Siro in the opening round of fixtures, Barcelona began with a resounding 4-0 home triumph over PSV that included a hat-trick from Messi.

Kane is full of admiration for the Argentine forward and aspires to match his scoring feats in his own career.

"He and [Cristiano] Ronaldo have gone above the levels others set in the past," the England international replied when asked about Barca's talismanic number 10.

"He has definitely set the standard for the rest of us - he still is.

"He's still scoring goals, so it motivates me to get even better and improve. Hopefully, one day, I can score as many, if not more, than he has."