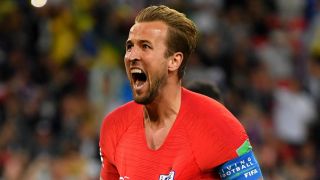 Harry Kane has won the Golden Boot for the 2018 World Cup.

The England captain scored six times in seven appearances to claim the prize for the tournament's top scorer.

The Tottenham forward is the first England player to win the award since Gary Lineker, who scored six times in the 1986 finals.

6 - With six goals, Harry Kane has become only the second English player to ever win the World Cup Golden Boot, after in 1986. Trophy.July 15, 2018

Congratulations to on winning the golden boot. Welcome to the club, young man.July 15, 2018

The 24-year-old only scored three of his goals from open play, two of which were headers in the 2-1 opening group win over Tunisia. His other came when he deflected in a Ruben Loftus-Cheek shot against Panama.

Kane's other three goals came from the penalty spot: two against Panama, and one in the last-16 game with Colombia.