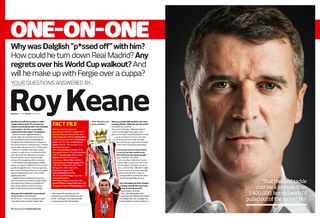 The Cork-born midfielder once famously locked horns with Arsenal powerhouse Patrick Vieira before United faced the Gunners at Highbury in 2005.

Keane launched an expletive-laden tirade at his Arsenal counterpart in the tunnel before kick-off, forcing referee Graham Poll to step in and cool tensions.

But the 43-year-old claims he was simply defending team-mate Gary Neville, who had been on the receiving end of some harsh words from the Frenchman.

The midfielder, who made 480 appearances for United, remains adamant he never sought to wind anyone up, and instead was simply looking out for Neville.

Speaking exclusively in the January 2015 issue of FourFourTwo, available in shops and on iPad now, the former Republic of Ireland international, who was capped 67 times, also admits his love for on-pitch battles with tough opponents.

"I wasn't winding up anyone at Highbury that night – I was just defending Gary Neville," he says in a One-on-One interview.

"I never went into a game to wind someone up, never. I loved my battles with Patrick, and with guys like [Steven] Gerrard and [Frank] Lampard as well, and Scholesy and Butty in training. That's why I played the game.

"You are judged by how you do against the top players, so I loved coming up against Patrick. He was a tough, tough opponent. He used to say he could dominate me, and I would do the same to him.

"We were like two boxers boasting about what we could do. I would fancy my chances against him, and most players."

Although Vieira scored after just eight minutes on that particular night in question, it was Keane who dominated, leading his United side to a 4-2 triumph.

Read the full interview with Roy Keane in the January 2015 issue of FourFourTwo, available in shops and on iPad now. The magazine hails the Men of the Year, hears from Thomas Muller, Philipp Lahm and Manuel Neuer about Germany's World Cup triumph and listens to Gareth Bale and James Rodriguez narrate the images that defined their years. Plus, FFT examines the death of defending, gets the inside story on Sierra Leone footballers who must deal with paranoid teams and abusive fans as the Ebola disease sweeps the country, and recalls the days of the 'disco train' when British Rail's Football Specials became vehicles for violence in the '60s. Subscribe!