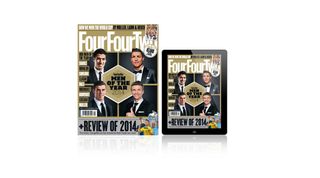 It began with Tim Sherwood somehow masterminding a win at Old Trafford and will end with... well, we don’t know yet, but 2014 is drawing to a close and FFT is breaking out the champagne and dinner jackets. For the first time, we present the FourFourTwo Men of the Year issue. Subscribe now.

It's been a magnificent footballing year for many a player, manager and fan, and we dish out the gongs to those men and women who made the difference and stood apart in 2014.

What’s more, Jamie Carragher talks us through a dramatic 12 months for Luis Suarez, French second-division gaffer Corinne Diacre exposes the truth of being a female manager in a man’s game, and Diego Simeone’s mentor reveals what makes our Manager of the Year tick.

And if that isn’t enough, enjoy our review of 2014, featuring Eurovision, pigeons and Fans of the Year.

One man to make plenty of headlines in 2014 was the ever-bashful Roy Keane. The former Manchester United midfielder released the year’s most explosive autobiography, and followed it up with one of our most revealing One-on-One interviews to date, tackling everything from Alex Ferguson (“He owes me an apology”) to growing Ireland’s thickest beard (“I’m just lazy”). The grizzler turned down our request for him to hold a hand grenade, however, saying: “I admire you for asking, but not in a million years.” Shame.

He doesn’t dominate the back pages like Keano but he’s just as brutally honest: meet Colin McGowan, the chief executive of shock SPL high-fliers Hamilton Academical. The man at the heart of Scotland’s surprise success story is a self-confessed drug addict and alcoholic, who previously lived on the street and tried to kill himself three times. His story is a must-read.

Meanwhile, FourFourTwo heads to Africa to get the inside story of how Sierra Leone’s national team tried – and unsurprisingly failed – to qualify for the Africa Cup of Nations during the Ebola outbreak. From opponents refusing to shake hands, to facing deportation at gunpoint, theirs is an extraordinary tale.

In the 1960s and ‘70s, football hooligans would regularly trash trains on the way back from matches. The rail network’s solution? To launch the League Liner, “a 63ft-long discotheque” complete with DJ, TVs and card tables. Guess how that worked out...

And while you’re on the nostalgia trail, you can have a gander at our feature on the lost art of defending. As rule changes favour attackers, and managers expect their defenders to pass and get forward, the hardnut centre-back is “extinct” according to Terry Butcher – and he’d know. We look at what changed, and why David Beckham is partly to blame.

Finally... there is no finally. The new edition promises much more besides, including Stuart Pearce’s Perfect XI (“He was brave, bordering on daft”), Sergio Aguero’s Performance masterclass, Nathan Blake’s acting, Grimsby’s sticker album, Planet Football’s weirdest nicknames and interviews with Harry Redknapp, Tim Howard and Giovani dos Santos. Get yourself a copy, then a second one to put in somebody’s stocking.

Available from Wednesday December 3, in print and digitally.