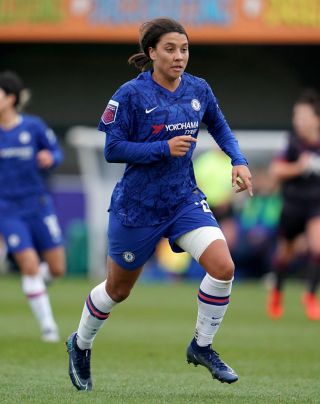 Sam Kerr hailed the quality of her new team-mates after making her Chelsea debut in a 3-1 win over Reading in the Women’s Super League.

The Australia international did not find the scoresheet – goals from Beth England, Guro Reiten and Erin Cuthbert were enough – but she was happy to be up and running in England.

“I’m obviously still finding my feet in England but I enjoyed it. It was awesome working with Beth, she’s a quality player. The girls are quality and I’ve settled in as best I can in nine days,” she said.

Kerr left life in the American National Women’s Soccer League with three golden boots and the title as the league’s all-time top goal scorer at the age of 26.

“It was pretty high-paced obviously, the only real difference is that the American fields are much bigger so it stretches out a lot more. I really enjoyed it, I’m still finding my feet after my little break but I enjoyed it,” she added.

“The girls are quality, the team’s quality and the game was quality today. I think this team is one of the best in England for sure and hopefully we can be the best in Europe.”

Starting brightly, Reading took the lead in the 14th minute thanks to captain Fara Williams. A ball in the box was chested down by Brooke Chaplen and Williams provided a rasping volley into the bottom corner. The visitors had started well and were causing the Chelsea defence numerous problems.

However, two minutes later Reading were dealt a huge blow. Kerr marauded through on goal and was brought down by the oncoming Grace Moloney, who was consequently sent off.

With the one-player advantage, Chelsea began to control the game with Drew Spence dictating the tempo of the match. In the 39th minute, Chelsea managed to find a breakthrough after some neat play saw Kerr back-heel the ball into the path of England, who tucked it home for her seventh goal of the season.

The hosts went on to complete the turnaround in the second half thanks to a goal in the 64th minute by Reiten and then 10 minutes later Cuthbert secured all three points.

Chelsea and England centre-back Millie Bright ensured that the hosts held on to their victory, making superb challenges before launching crossfield balls to the attackers.

She said: “Obviously it was a sloppy goal to concede, which is something we’ll review and look at. Again, we created a lot of opportunities and I still think we can be more ruthless in front of goal and really put our chances away.

“We’ve played Reading many a time and we know how they play as a team. I think we just had a rocky start to the game and we just needed to get a hold of it and settle the game.”