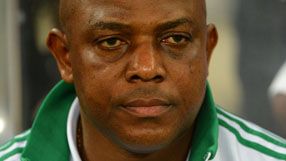 Keshi, preparing his team for their second Group C match against defending champions Zambia in Nelspruit on Friday, said he had been impressed by all 16 teams who made it to South Africa, and that the days when minnows reached these finals only to lose heavily to bigger teams had gone.

"I am very impressed with what I have seen so far," Keshi told reporters at a media conference at a hotel resort set in the rolling Mpumalanga countryside some 15 kilometres from the Mbombela Stadium venue.

"You can no longer differentiate so much between which teams are better. In the old days you could predict how many goals one team was going to score against the other but now you don't know what is going to happen. You might think one side will win but you don't know.

"I think this is wonderful for African football. The competition is so tight, you look at the likes of Ethiopia and Cape Verde and some of the other countries. I am very impressed with their performances and the standard they are reaching.

"Look at how Togo played against Ivory Coast, for example. There is no one outstanding team. It is a very tight competition and that is good."

Five of the first eight matches ended in draws and, following Wednesday's second matches in Group A, six of the 10 matches to date have ended all-square.

No team scored three goals in any of those games and only South Africa, who beat Angola 2-0 on Wednesday, won by more than a single goal.

Keshi talks from experience, having played in five final tournaments and won the cup with Nigeria when they were last champions in 1994, although he missed the final.

He is now a head coach at his third finals, after stints with Togo and Mali, and is bidding to become only the second man after Mahmoud El Gohary, who won the cup as a player with Egypt in 1959 and as Egypt coach in 1998, to win it in both roles.

Keshi, who turned 51 on Wednesday, denied that he was under any pressure because they were held by Burkina Faso and said he had no problems making some necessary changes to his side to face the champions.

One change has been enforced as Celtic defender Efe Ambrose is suspended after his late red card on Monday. Another may be the introduction of Chelsea's Victor Moses into the starting lineup following his recovery from a hamstring injury which has allowed him to train this week.

Asked if he had taken time out to celebrate his birthday, Keshi said: "No, I didn't. I wake up every day and think every day is my birthday, and I do not feel under any pressure here. We know what we have to do, the atmosphere among the players is fantastic and we are ready to face the champions."