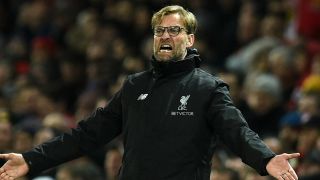 Klopp found himself in the spotlight after shouting in the face of assistant referee Neil Swarbrick as Liverpool drew 1-1 at home to Premier League leaders Chelsea, with the German later claiming he yelled "no one can beat us" at the official.

The former Borussia Dortmund boss was fortunate to escape without punishment, much to the frustration of Manchester United manager Jose Mourinho, but Klopp said he could see red again.

"I can't give a guarantee that it won't happen again," he said.

"I could say now that it won't, but that would be a lie. That's why there are fines for it. If we go over the top, then give us a fine. It's right that we should pay the penalty.

"Managers are not by nature the kind of people who want to have a go at the referee. Do you think Arsene Wenger is a person who, when he sees the fourth official, wants to punch him? That’s not how he is and everybody knows it.

"Sometimes you can't control yourself and you say things like, 'Nobody can beat us'. I have never heard a more silly sentence, given that we'd lost the three previous matches.

"And as for how I looked when saying it... I was lucky in the way the fourth official reacted and I hope he didn't get into trouble because of it. His was the reaction of a human being."