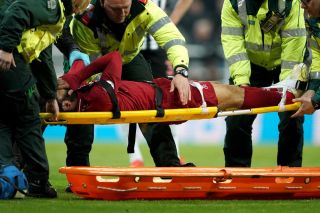 Liverpool forward Mohamed Salah is a doubt for next week’s Champions League semi-final second leg against Barcelona after being carried off with a head injury in the 3-2 victory at Newcastle.

The problems are adding up for manager Jurgen Klopp as Roberto Firmino, who tore a muscle last week but still managed to come on as a late substitute in the Nou Camp, has already been ruled out of Tuesday’s game.

If they were to be without Salah, who is their leading goalscorer after netting his 26th of the season at St James’ Park, it would be a significant blow to their hopes.

.@LFC manager Jürgen Klopp remains optimistic over @MoSalah’s fitness for @FCBarcelona – although it may be more in hope than expectation. “He was fine but of course we have to wait,” he said. Good to seem him walking out of St James’ Park comfortably at least pic.twitter.com/jodOFccwf9— Carl Markham (@carlmarkham) May 4, 2019

The Egypt international was injured in a collision with goalkeeper Martin Dubravka and lay motionless on the pitch for several minutes while he was treated before leaving the field on a stretcher with his hands covering his face.

Klopp remains optimistic the 26-year-old will be available at Anfield on Tuesday.

“He got the hip of the goalie in his head and then was on the ground,” said the Reds boss.

“When we came in, he was sitting in the dressing room and watching the game, or had watched the game.

“He was then fine but of course we have to wait. He got a proper knock in that situation.”

The situation is not so good for Firmino, who was absent for all-but 11 minutes of the midweek defeat in Catalonia and could yet miss the remainder of the season.

“No, he will not be ready for Tuesday and the rest [of the season] we will see,” Klopp added.