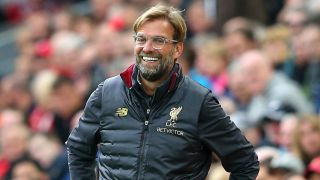 Jurgen Klopp has laughed off a suggestion from Neil Warnock that Liverpool will be "virtually impossible" for Cardiff City to beat.

The Reds will aim to extend their unbeaten start in the Premier League to 10 matches when they take on a Cardiff side who got their first win of the season against Fulham last week.

Manager Warnock suggested his side would have a thankless task at Anfield if Liverpool were at their best, but Klopp is not prepared to take Saturday's task lightly.

"I'm really looking forward to meeting him," he laughed after Warnock's claims were put to him at a news conference. "I've heard a lot about him and he's obviously vocal-wise very talented. It will be a big pleasure to meet him.

"It would be so cool if that's the truth but it's not, and they will try everything. He's one of the most experienced managers in the world of football and so successful in the past. It's unbelievable what he did. My respect for the Championship grows every day, pretty much, it's such a difficult league and he looks like he could do in that league what he wants. He got promoted and it's an unbelievable achievement.

"We are aware of the quality of Cardiff. Last week gave them a big boost but before they were not bad, the games before then were pretty tight, and they could have got a different result. They deserve all our respect and they'll get it.

"[Warnock] looks like a character, a very, very emotional and lively person. I saw a lot of the final period of the Championship last year and it was impressive how they did.

"He looks like a very demanding manager and his team are playing like he wants them to play, so he has all my respect because that's not too easy. Of all the big English active managers, he's the last one I have to meet, so I look forward to it."

Klopp, who confirmed midfielders Jordan Henderson and Naby Keita would not be fit to return after missing the win over Red Star Belgrade, would not say whether Fabinho would keep his place in the side.

The Brazilian made his second start for Liverpool in the 4-0 Champions League win on Wednesday and was widely praised for his performance.

"I don't know what you can expect and don't want to tell you what you should expect but it was good, it looked good," he said. "It was a game where I thought it made sense to do it like this, it was not because of injuries.

"I heard people were quite excited by the performance of Fabinho especially, but he is still is a young fella and still has to and can improve."

Joe Gomez is another who has impressed with his recent form and Klopp was keen to praise the defender's progress amid suggestions he is due to be offered a new contract.

"Joe is a very important part of the squad and it's so nice to see," Klopp added. "I remember when I came in, I knew him but not really well, everybody told me about him and how good he was when he came to Liverpool. When I watched games back to learn a bit more about the team, I think he played mostly as a left-back, wing-back or whatever, so it was good, but it was not 'okay, that will change the football world'. Then he got an injury and since then he had to fight back, and it took a while.

"Now, seeing him full of confidence and fit, I know what they were talking about when they told me how good he was and, much more important, how good he is. He has a big future at Liverpool, no doubt about that."